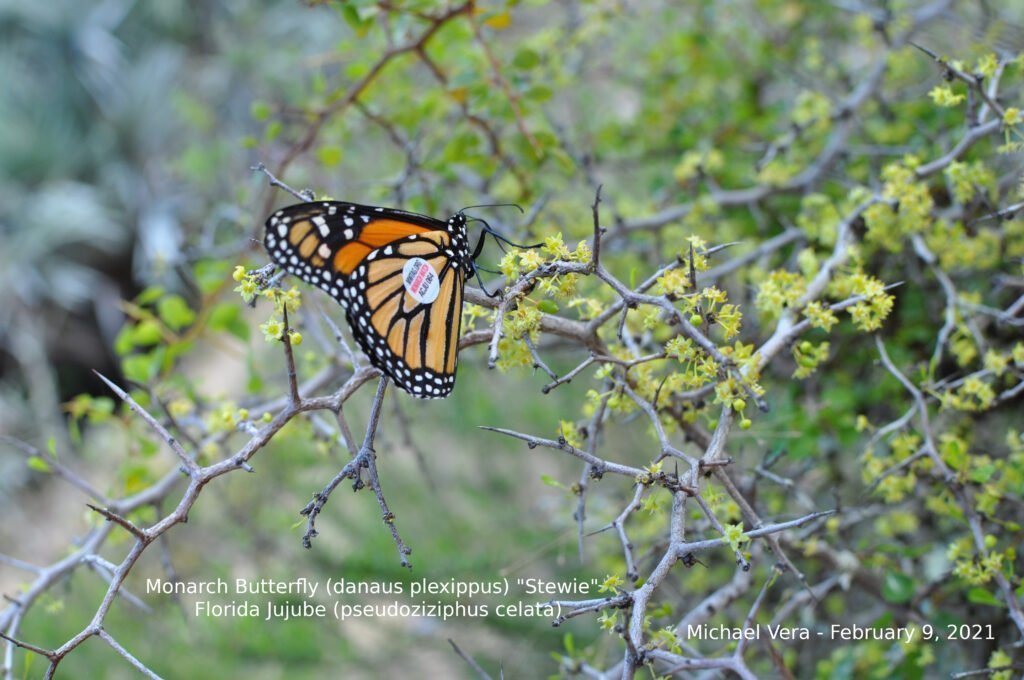 The flowers of Parry’s Jujube, also known to the California Chaparral as Wild Plum, appear in late winter, and each only last around three days. Further, the Jujube cannot self-pollinate, so cross-pollination of genetically and geographically different plants would currently require pollinators with a range in the tens of miles. This rules out many of the smaller pollinators that may be observed on the Jujube, such as blow flies or sweat bees. This does not, however, rule out the Monarch Butterfly who has been known to cover hundreds, and even thousands of miles in migration.

This led to Johnny’s hypothesis that perhaps a Brushfoot (nymphalidae), and more specifically a Monarch, could cross-pollinate different Jujube’s over the full range of the Lake Wales Ridge, since they are well known for long-ranging flights. It could be that a Monarch Butterfly’s action of using its brush-foot to “pre-taste” the Jujube flower might be enough to pollinate them. Interestingly, high pine sandhills and scrubs of the Lake Wales Ridge should contain Milkweeds (asclepias), such as Sandhill Milkweed (asclepias humistrata), among the herbaceous ground cover throughout its range.

Further, those butterflies in the southeastern portion of the United States should migrate down the Lake Wales Ridge, and thus be available at the time of Florida Jujube flowering. Alternately, any non-migrating Monarchs are also available for pollination of Florida Jujube flowers at blooming time. Johnny Butterflyseed has certainly observed wild Milkweed populations thriving in Polk County in January and February, even in more mesic pine flatwoods under decades of fire suppression. Certainly, the vast Longleaf Pine (pinus palustris) forests of Florida would have had Monarchs throughout most of its range and throughout most of the year.

So the experiment was set: “Would a Monarch Butterfly nectar from a Florida Jujube flower, if offered the opportunity?”

To carry out the experiment, Tarisa Parrish hand-selected the perfect Monarch Butterfly from Johnny’s reserves.

“Stewie” was taken out of long-term storage from the Lepidoptery Laboratory and hatched January 29th, 2021. After 24 hours to “cure”, he was tagged on his right discal cell with MWTAG.ORG tag number ‘ACJU 064’.

Stewie first learned to use his proboscis during hand-feeding sessions with Tarisa. A cotton ball was soaked with distilled water and local honey in a ten to one ratio. Stewie, as many male Monarchs, took to eating immediately and had an excellent appetite. He learned to sip the nectar of Pentas (pentas lanceolata) immediately after. As a result of his consistent performance over the course of 9 days of observed feedings, we believed he would not give a False Negative if he were to turn up his nose up at the Florida Jujube flowers. If Stewie refuses the Jujube nectar, he genuinely doesn’t want it.

There were still hundreds of the Jujube’s perfect little green flowers available for Stewie to sample. He was gently placed onto a small group of Parry’s Jujube flowers and immediately found nectar, drinking deeply. He meandered through the geniculate, thorny branches, tasting dozens of individual Jujube flowers. There is no question; Stewie likes them.

He sipped merrily until he caught scent of a nearby Shinner’s Apalachicola False Rosemary (conradina glabra) flower, which he preferred by a wide margin.

For good measure, we also let Stewie taste the blooming Scrub Plum (Prunus geniuculata) in Bok’s collection. Stewie definitely liked and drank the nectar from the Scrub Plum, but he still preferred the Apalachicola False Rosemary.

In the end, Stewie became the Butterfly world’s first Official Taste Tester. His first taste tests were of some of the world’s most precious, endangered flowers. What a job for a butterfly.

Stewie was officially released into the wild the next day at the Holbrook Family Monarch Waystation. He immediately took two or three girlfriends, one of which promptly laid Stewie’s eggs on nearby Milkweed leaves and stems. We are certain Stewie’s caterpillars will be healthy and feisty.

Stewie drinking from the Florida Jujube flowers was a relief in many ways to the team; it became possible that Monarch Butterflies could help cross-pollinate Florida Jujubes over the many miles.

The next step will be to determine if the Monarch actually pollinate Parry’s Jujube flowers. Johnny’s guess is, “Yes.”